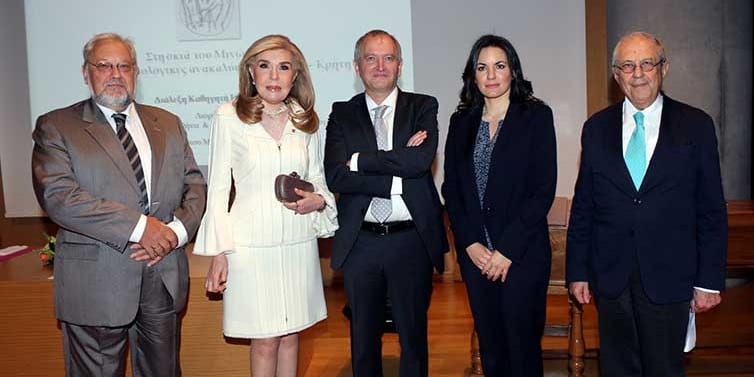 On 18 April 2013 on the occasion of the International Day for Monuments and Sites, or as it is better known World Heritage Day, the Belgian Embassy in Athens and the Marianna V. Vardinoyannis foundation held a lecture by Jan Driessen Professor of Archeology at the Amphitheatre of the Acropolis Museum, on the subject In the shadow of the Minotaur: New archaeological discoveries at Sissi, Crete.

The event was placed under the aegis of UNESCO, and its Director–General, Mrs. Irina Bokova sent a personal message to the participants: I am sending my greetings to all those who are participating in your event and my heartfelt congratulations to the Belgian Embassy and the Marianna V. Vardinoyannis Foundation for the initiative to organise this very important event to celebrate the International Day for Monuments and Sites. I would like once again to express my esteem for Mrs. Vardinoyannis, for her unwavering dedication to UNESCO objectives and particularly the sectors of education, social solidarity and culture. International Day for Monuments and Sites is dedicated to protecting world cultural and natural heritage and aims at awakening local societies around the world on the important role that cultural and natural heritage plays in their lives and raising awareness about the heritages fragility, so that they can take initiatives to protect and preserve it. It is a happy coincidence that this event is taking place in the wonderful Acropolis Museum, which is dedicated to one of the most important monuments of mankind, the Parthenon, which is a symbol of western civilisation and UNESCO‘s logo. Particularly in difficult times, monuments of culture amplify strength and faith offering a feeling of continuity, dignity and hope for the best. We should all build on the basis of experiences from the past and adopt innovative means of protecting and safeguarding the rich Greek heritage. We should all be aware and active in protecting global heritage, building alliances for today and tomorrow It is my sincere hope that your event will be a starting point for creative dialogue!

The event started with the opening address of the President of the Acropolis Museum, Professor Dimitrios Pandermalis, who referred to the importance of celebrating World Cultural Heritage Day as well as preserving its monuments, stressing that their wealth endows us with invaluable knowledge and experience.

Mr. Marc Van Den Reek, Belgian Ambassador to Athens, spoke immediately afterwards and underscored the contribution of Greece to World Heritage Day and expressed his love and admiration for it, characteristically stating: In Belgium we believe that Greece is a lot more than banks and bonds. It needs a positive message, it needs recognition that international relations are more than banks and bonds, that without a cultural dimension there are no relations.

Mrs. Marianna V. Vardinoyannis then delivered her speech, in which she referred to the importance of World Heritage Day and the International Convention for the protection of Cultural and Natural heritage: The Purpose of this Day is to provide information on the diversity of cultural heritage, its fragility and the efforts required to protect and preserve it Personally I will not stop working for all monuments in the world, through my mission in UNESCO and even more so for the monuments of Greece, with the widespread presence of the symbols of the Ancient Greek world, in spite of the passage of time and the destruction wrought by passing conquerors. My thoughts go to the Parthenon marbles which can be seen at this very moment amputated in the wonderful premises of the Acropolis Museum. On the occasion of this anniversary  I truly wish that we could see them return home Last year UNESCO celebrated the 40th Anniversary of the Convention with important initiatives and many events. These showcased the importance of cultural and natural heritage and the responsibility that we have to protect archaeological treasures and natural beauty and to deliver them unharmed to future generations! At this point I would like to warmly thank UNESCO Director-General Ιrina Bokova, who placed our event under the aegis of UNESCO and sent a truly moving personal message. She conveys her thoughts, her esteem and her assurances that UNESCO will continue its invaluable initiatives to preserve monuments… I would also like to thank the Belgian Ambassador to Athens, who loves Greece and tirelessly strives to realise an important task through various events throughout Greece saluting the friendship between Greece and Belgium.

Mrs. Vardinoyannis did not omit to thank all those who contributed to organising this event, as well as the participants, and in presenting the keynote speaker of the event underscored: It is a great pleasure to have Professor Jan Driessen with us. It is an honour to meet people such as himself who bring to light the secrets of the ancient world and have their name forever linked with the history of our land. I was first acquainted with his work a few years ago as his books are listed in the literature references of my own book on womens identity in the Minoan Society, which I presented to UNESCO two years ago Now, both as a Greek and due to my strong ties to Crete as the homeland of my family, I would like to thank the Belgian School of Athens for the excavations that it has carried out and has helped Greece continue to generate Culture, through a period that is particularly difficult for any archaeological excavation initiative Because the symbols of the past are the strongest expression of our course towards the future; they are a part of ourselves and indications of the amazing evolution and intellect of man around the world, for which we must all feel proud.

Immediately afterwards Professor Jan Driessen, was given the floor and riveted guests with his exciting lecture during which he referred extensively to the findings of the excavation of Belgian School of Athens at Sissi in Crete, posing new and crucial questions on the role that the palaces uncovered to date had in the social and religious life of Minoans. He voiced the wish that these would soon be included in the list of World Heritage monuments: Mr. Driessen posed a series of questions in his speech: Why did we not find royal graves, when we found an entire cemetery?, Why did we not find elements  pictures, building layout, graves  that would bring to mind the existence of a strong leader, as was the case in the Egyptian Pharaonic Period or in Ancient Mesopotamia?, And if these Minoan palaces were not royal residences, who lived in them?” were some of the questions that Mr. Driessen put in his speech. More specifically, he said: Studies of Minoan society – and I would like to applaud Mrs. Vardinoyannis for writing one of the few books on Minoan society, that has expert information, is beautifully written and wonderfully illustrated – have underscored that in contrast with other societies, societies, which had kings or even “God sent” kings, Minoan Crete does not have elements normally connected with leaders.