The 29th Athens Marathon supports the educational programmes of UNESCO 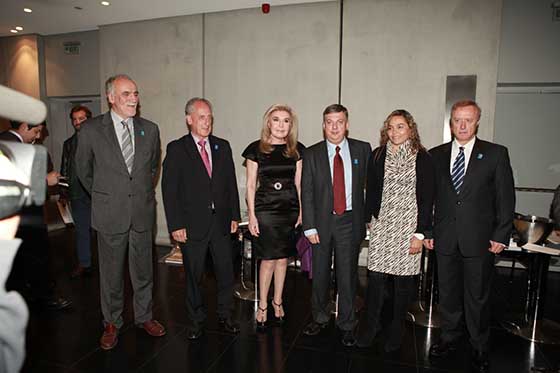 The 29th Athens Classic Marathon, that took place on 14 November 2011, under the auspices of the President of the Republic, Mr. Karolos Papoulias, and UNESCO, apart from its historical, cultural and athletic dimension, also displayed another very important one, its humanitarian profile, since part of the proceeds from the Marathon were donated in order to support the educational programmes of UNESCO, targeting poor children and mainly girls.

On the eve of the Marathon event, and wishing to support the 29th Athens Marathon and the important collaboration between SEGAS (Hellenic Association of Amateur Athletics) and UNESCO, the Goodwill Ambassador of UNESCO, Mrs. Marianna V. Vardinoyannis, organized an event at the Acropolis Museum in order to honour the visitors from abroad and the people who support the efforts of SEGAS and the aims of UNESCO, and also in order to send her best wishes to the thousands of marathon runners, young and old, Greeks and foreigners, who arrived in Athens from all over the world.

In her brief address to those invited to the event, Mrs. Vardinoyannis stated: The Athens Classic Marathon is a symbolic route from the past to the present and the future, which promotes the grandeur of human will and disseminates the potential of fair play. It is a race based on the ideals of peace, solidarity and sportsmanship. A race hosted here in Athens, the cradle of Democracy, the city which has always opened up and continues to open up its arms to receive thousands of athletes from around the worlds to momentous sports events. In this particular case, it welcomes athletes who come here to complete the famous route, not for the prize, but for the honour and symbolism involved…This year, in fact, one year after celebrating 2,500 years since the Battle of Marathon, the collaboration between SEGAS and UNESCO forms an initiative that adds a deeper symbolism to the event. At a time when Greece is at the focus of international attention for its political and economic situation, this collaboration and the event itself which is taking place tomorrow despite the current crisis, serve to send the message that the Greek spirit remains alive and strong, that Greece, even at the most critical time for its future, is still the leader of international initiatives, a custodian of culture extending a helping hand to offer humanitarian aid to children in need. This help originates from the participation of thousands of athletes in this years Classic Marathon. This race will remind the whole world, for the first time after all these months of negative news about our country, that Greece still remains the country of Olympism, of humanism and of the wordly ideals that our enlightened ancestors taught us over the centuries. The spirit of the Marathon is today becoming more significant than ever before, both for our people and for the people of other countries, who are called upon to overcome the crisis through their own daily marathon with sacrifice, patience and stamina; it is a crisis that is not only economic but also intellectual, moral and social. Such an event then sends a message of hope along with the conviction that any hard effort, whether personal or collective, can lead to a better future; building such a future is also a basic aim of UNESCO, through the promotion of peace, international collaboration, education and sustainable development… Finally, I would like from my heart to wish every success to all the athletes that will take part in the Athens Classic Marathon, women and men, young and old, Greeks and foreigners, whose energy and enthusiasm will make the message of the race even stronger, the message of hope and peace, that will be sent from Athens to every corner of the World!.

The President of SEGAS, Mr. Vasilis Sevastis, also addressed the event and underlined the significance of the collaboration between SEGAS and UNESCO, noting that: It promotes the symbolism and Values of Cultural and Historical heritage, to which the outcome of the battle of Marathon and the extreme efforts of the Athenian soldiers have provided international recognition. At the same time, this collaboration confirms that Greece continues to stand at the forefront of Internationalist initiatives for the solidarity of the People, and for this purpose SEGAS has dedicated this years events related to the Athens Classic Marathon, through the contribution of the runners and the participating Bodies, to supporting the goals of UNESCO. This initiative by Mrs. Marianna Vardinoyannis is another contribution to this effort, and for this reason we would like to express our deepest gratitude.