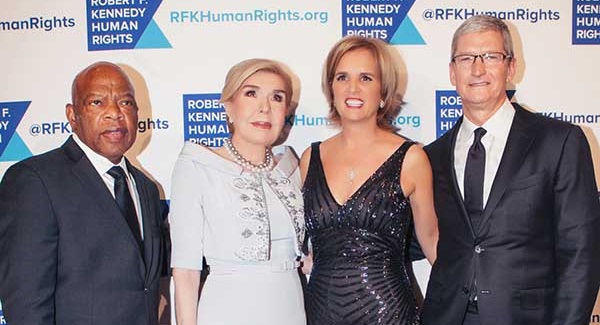 Every year, the “Robert F. Kennedy Human Rights” presents the “Ripple of Hope Awards” to international personalities whose actions serve the visions of the late Robert F. Kennedy for a more just and peaceful world, a world without discrimination and marginalized groups, where human rights are respected for all and by all.

Recipients of honor of the Awards 2015 were: Honorable John Lewis, Senator and fighter for human rights, Tim Cook, the President and CEO of Apple, Marianna V. Vardinoyannis, UNESCO Goodwill Ambassador and Roger Altman, the president of “Evercore Partners”.

The personality and the work of Mrs. Vardinoyannis were presented by Kathleen Kennedy Townsend, former Lieutenant Governor of Maryland and sister of the President of the Foundation «Robert F. Kennedy Human Rights», Kerry Kennedy: «The ancient Greek philosophers, poets and heroes guided my fathers understantding of pain and hurt, and compassion for all those who suffer and inspired his grasp of life as a dangerous adventure that must be lived to its fullest. It is fitting that our next recipient is Marianna Vardinoyannis, whose great heart has taken her to toughest areas on earth, and helped those often left abandoned and alone. She is UNESCO Goodwill Ambassador. She has created a surgery center at hospital in Kosovo, an early childhood training center in Bethlehem, supported , girls education in Gaza, campaigned against the sexual abuse of children and pedophili on the Internet. And worked with experts on protecting civilians during armed conflicts. Her vision and initiatives for children s health especially battling childhood cancer- have saved more than 770 children s lives. More than 1600 families of sick children have been hosted at her foundation in Athens. And mostly recently, whilw others counsel shuttering the doors, Marianna Vardinoyannis, with courage that we in the United States could take to heart, has created a system of food, shelter and medical supplies for thousands of refugees washed up on the shore of Greece . For these and countless other acts of selfless service to humanity, please welcome Ethel Kennedy to present the Robert F. Kennedy Ripple of Hope Award to Marianna Vardinoyannis”.

Mrs. Vardinoyannis received the award from the founder of «Robert F. Kennedy Human Rights», Mrs. Ethel Kennedy. During her acceptance speech she said: “I feel humbled and deeply touched to receive this special award tonight. The symbolism of the “Ripple of Hope”, as conceived by Robert F. Kennedy, touches my heart, especially because it represents the power of everyday struggles in changing our world. First of all, allow me to thank the founder of the “Robert F. Kennedy Human Rights”, the woman who inspired with her determination, her sensitivity and her hard work, not only her family but also many generations of women in the USA and across the world: my dear friend, Ethel Kennedy, who has always been a role model for me.

I would like to warmly thank the Board of Directors and the President of the “Robert F. Kennedy Human Rights”, Kerry Kennedy, for this inspiring award and for our continuous co-operation all these years. Thank you, my dear Kerry, for keeping our hopes alive! I share your visions with all my heart and I admire your work so much. It is a real challenge, under these difficult international circumstances, not only to focus on the leaders who fight for justice and democracy, but also to educate the new generations to recognize them and appreciate the values they stand for. The honor I feel today becomes even greater, as I stand among three great humanists: The Honorable John Lewis, Τim Cook and Roger Altman. I would like to express my warmest congratulations to them for the award that they are receiving tonight and for their outstanding work which I admire for many years. I treasure this special award as one of the most important and touching moments of my life. And I want to share it with my husband Vardis and our beloved family as they have always been next to me, giving me the courage to fight for my beliefs. I also wish to dedicate it to the children suffering from cancer. Being so close to them for 25 years through ELPIDA association, they have become a unique source of inspiration and determination to me through their unbelievable courage and strength. They are symbols of hope while they are battling for life. They become symbols of a world that we dream of, a world of equal chances for all and of the right to live in dignity. I accept this Award with great pride in the name of this Ripple of Hope that each one of us can initiate in order to jointly build the “current which can sweep down the mightiest walls of oppression and resistance” as Robert F. Kennedy taught us. By joining our forces, by sharing the “Robert F. Kennedy Human Rights” visions, I am completely sure that a better world for our children will rise one day! A world where we can leave our trace of peace and solidarity!”.

The “Ripple of Hope Award 2015” recipient, Tim Cook taking the floor said inter alia: “It’s incredible honor to share the award with Roger, Marianna and my good friend John Lewis. Anything can become possible if we work together. Robert Kennedy put this challenge. And it is up to us to respond. It is up to us to work harder, to do the best we can. It is up to us to find the courage to act. It is up to us to start our own ripples of hope “. Tim Cook spoke also about a number of critical social problems the global community faces, like the crisis in Syria and the climate change, but also for the charitable work of Apple, the opportunities for access to quality education, the need to respect diversity, the need to eliminate racial and other social discrimination, and about the power of technology to improve our lives. Referring to social change he stressed that this depends not only on individual action but also on corporate, sending to the business community the message that their decisions must not only based on the value of their shares: “We believe, Tim Cook said, a company, first of all must seek for the public good, to empower people, and to bring us closer to one another so that all understand that the problems of one are actually problems of all … “.

Roger Altman, 2015 Award recipient, as emphasized during the event, is a man who, throughout his life, marched guided by the ideals of Robert Kennedy, serving society and supporting the work and initiatives of the most vulnerable social groups.

The “Ripple of Hope Awards” event was attended by His Eminence Archbishop of America, Dimitrios, Princess Alexandra of Greece, Ambassador Elizabeth Bagley, Ambassador of Greece to the United Nations, Dr. Ekaterini Boura, the President of the Hellenic-American Chamber of Commerce, Nancy Papaioannou, the UN Ambassador for the Alliance of civilizations, Nassir Abdulaziz Al Nasser and his wife Muna Rihani Al-Nasser, and many others. It was also attended by members of the Kennedy family, as well as of the Vardinoyannis family.