Presentation of the Greek publication of the book Labouring with the Challenges of Female Identity: Insights into Minoan Society 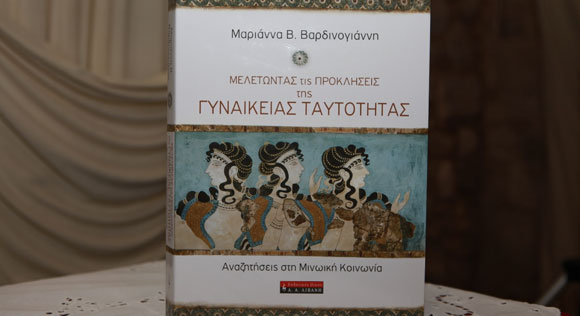 On 27 July 2011, the Mayor of Rethymno, Mr Giorgis Marinakis, along with many people welcomed Mr Vardis J. Vardinoyannis and his wife, Mrs Marianna V. Vardinoyannis, who visited the historical city on the occasion of the presentation of theGreek publication of Mrs Vardinoyiannis’ book “Labouring with the Challenges of Female Identity: Insights into Minoan society”.

The book focuses on the social role of women in Minoan Crete from 4000 until 2000 B.C. and the author presents the similarities between the challenges faced by Minoan women in their everyday life and those faced by women in other societies as well as by women today. Through the archaeological findings, she discovers secret symbolisms for maternity and women solidarity, although, for many years, women and children were the “silent” or the “invisible” people in the prehistoric era. The content of the book is based on Mrs Vardinoyannis’ postgraduate research in Archaeology in the University of Sheffield.

The English publication of book was presented at the UNESCO Headquarters in Paris, in December 2010, on the occasion of the celebration of the organisation’s 65th anniversary. This was a very important event for Greece and a very honorary one for Mrs Vardinoyannis, since such an important part of the Greek culture as the Minoan civilization was selected by UNESCO in order to be presented through her book and connected with this special anniversary, which was celebrated under the presence of the Goodwill Ambassadors as well as the Ambassadors of the Member States of UNESCO.

In his opening speech, the Mayor of Rethymno spoke for the importance of such a book that presents the Cretan culture and the precious support of Vardis and Marianna Vardinoyannis for their homeland. He particularly thanked Mrs Vardinoyannis for honouring the people of Crete by accepting their invitation and officially presenting the Greek publication of her book in Rethymno. The Mayor, referring to her work which honours her family as well as our country worldwide, characteristically said:

Mrs Marianna Vardinoyannis is well-known to everybody. Indeed, having in mind her discretion and modesty β a characteristic element of the whole family- as well as her simplicity, I know that she prefers when referring to her to be done in a modest way. However, I cannot omit saying that Mrs Vardinoyannis keeps on astonishing us with her restless, effective and beneficial activity, as well as her personal intellectual development that, is constantly ascendant despite the load of her duties; an active woman who honours her family as well as her country combining the noblest characteristics in her personality. Her charity work, which started in Greece, has a global effect and is acknowledged with respect by the international community. It is a work that gives life, transfuses love to many children hearts and hope to many parents, to all of us, who know that no matter how many problems our country faces, there will always be her family there willing of helping, supporting, relieving within its efforts. We all know the greatness of their offer since we have all been recipients of their generosity.

The whole of Crete is benefited by Vardinoyannis family that never denied to decisively contribute, many times even in a catalytic way, in every step taken by our city and island: in health, education, culture, sports. Therefore, we are right to feel the need to express our deep estimate as well as gratitude to Mr Vardis Vardinoyannis and his wife Marianna, since we consider a great honour that these people who exceed both their geographic as well as human boundaries with their actions are our fellow citizens and express the most creative and human side of the Greek society. We are also considering that Mrs Marianna Vardinoyannis is our fellow citizen because of her dear husband who, beyond all his attributes, is a citizen of Rethymno and he justifies it with each of his initiatives and actions, but also because of her own declared love for Rethymno.

Then, Mrs Vardinoyannis spoke, thanking Mr Marinakis for his invitation as well as his kind words and, addressing the public, she spoke with emotion about why she wanted to present her book in Crete stating inter alia:

It is a particular honour for me and it fills my heart with deep emotions that I am here today, in our beloved Crete, in the historical Rethymno, and I am surrounded by friends and compatriots. And I use the words my compatriots because my grandfather was born in Crete and lived in Leonidio of Kynouria province. My family bonds with this place are very powerful, the roots are deep, and that is why they are always in my mind, heart and priorities as well as my husbands and our childrens.

I am among all of you with great pleasure, making my dream come true to present my book concerning the women of Minoan Crete to their own place and people, the guardians of this great cultural heritage whose support has always constituted a source of power and encouragement throughout the whole course of my work by the side of our fellow peopleβ¦

β¦ The women, along with the children, were the silent or invisible people of prehistory, as their roles and activities were not presented much in the anthropologic and archaeological research until the first feminist reactions in mid 60s and 70s. Of course, this has drastically changed today, and it was very important for me that I could search the prehistoric files in a modern perspective and study new fascinating theories. β¦ The research of such issues concerning the women roles, such as family and children, was a natural continuity of my personal concerns which are evident in my work at UNESCO and at our Foundation where I extensively deal with the issues related with family and children that are implicitly connected with the women as mothers and care and support providers for their families.

β¦ In this journey towards the completion of the book, I hope that I accurately perceived the devotion, determination, warmth and tenderness that these women expressed not only to their families and the breeding of their children but also to their society and fellow people. I consider it as heritage of the women identity that springs from the distant past, while it can also be cultivated in the present and be continued in the future, especially through activities as those held by UNESCO and its ambassadors in the entire the world during the past 65 years; those celebrated in Paris, last December, having the women of Minoan Crete and their culture as a background β¦

Following the presentation of the book, the Mayor of Rethymno presented Mrs Vardinoyannis with a gold copy of ”the Two Bees ” β a Minoan jewel symbolising maternity and fertility.

A particularly touching moment was when Mr Vardis Vardinoyannis stepped up and addressing his compatriots spoke with nostalgia about his childhood: I do not have much to say. If you knew what we have been doing then, when we were students here, I am afraid that you would not want to speak to us today. In any case, I can vividly recall the hours, the days I spent in Rethymno. We were a little mischievous but I am very glad that I see my schoolmates here; a little aged but they are well. I hope you are all well!

The warm applause of the people touched even more Mr and Mrs Vardinoyannis who they were keeping on shaking the hands of their friends and compatriots who were enthusiastically approaching them in order to greet and congratulate them.

Immediately afterwards, Mrs Vardinoyannis signed her books and offered them to those present along with a personal note for each one.