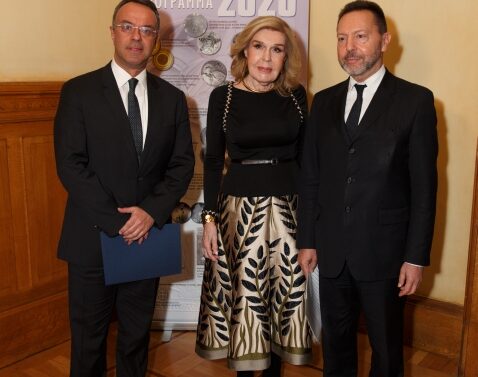 The celebrations for the Anniversary Year “Thermopylae – Salamis 2020” culminate with a great national offer from the “Marianna V. Vardinoyannis Foundation”.

At the initiative and offer of the President of the International Honorary Committee of the Anniversary Year “Thermopylae-Salamis 2020” Mrs. Marianna V. Vardinoyannis, the Collectors’ and Commemorative Coins of the Bank of Greece were sent to: Heads of State, International Organizations, Embassies and Foreign Missions in Greece, Hellenic National Defense General Staff and Hellenic Navy, schools of Greece and the Greek diaspora, all Regions and Municipalities of Greece, international personalities, academicians, representatives of the Church, Arts, Sports and the Media.

The aim of this symbolic offer is to send a message from Greece to the whole world about the ancient values ​​of Virtue, Democracy and Freedom, which remain timeless and are the only ones that can guarantee a better tomorrow for all humanity.

Mrs. Marianna V. Vardinoyannis emphasizes in her statement: “The 2.500th Anniversary of the Battle of Thermopylae and the Naval Battle of Salamis becomes a vehicle for the promotion of the history of Greece and its fundamental role in the genesis and formation of the Western Civilization. At the same time it gives everyone the opportunity to reflect on the countless symbolisms and universal values ​​such as democracy, freedom, virtue and bravery, which result from the most glorious defeat, that of Thermopylae, and the most important victory, that of Salamis, but also to the new generation to become a partaker of this great heritage and at the same time its messenger to the future societies. Our Foundation, with a distinctive sense of responsibility decided to send a Symbol of our history, such as the Anniversary Collectors’ Coins of the Bank of Greece, to Heads of State, institutions, foundations and mainly to the schools of Greece and the Greek community abroad.Our goal is one. Let us all send together a strong message of Virtue, Democracy and Freedom, from Greece. A message of these values ​​that can keep us standing in such a difficult period for all humanity“.

The Monetary Program 2020 of the Bank of Greece, a special feature of which was the issuance and circulation of coins commemorating the 2.500th anniversary of the Battle of Thermopylae and the Naval Battle of Salamis, was presented at a special event held at the Bank of Greece in February 2020, in the presence of the Governor of the Bank of Greece Mr. Yiannis Stournaras, the Minister of Finance Mr. Christos Staikouras and the President of the International Honorary Committee of the Anniversary Year “Thermopylae – Salamis 2020” Mrs. Marianna V. Vardinoyannis.

It is worth mentioning that the cost for this action was fully covered by the “Marianna V. Vardinoyannis Foundation”.