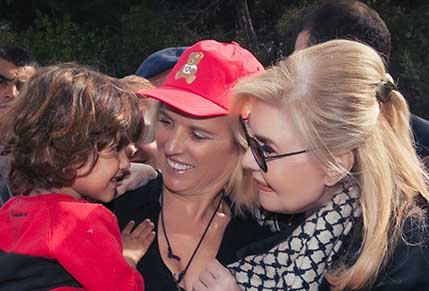 Taking this opportunity, Mrs. Vardinoyannis informed Ms. Kennedy about the actions undertaken by the Foundation in order to contribute to the relief of refugees and in particular about the “We Care” program which offers health care, preventive medical screening and vaccines where required – as well as clothing, toiletries and toys to refugee children. Mrs. Vardinoyannis also informed her about the new initiatives that the Foundation intends to take, namely the creation of a model refugee center for mothers and their children as well as for unaccompanied children.

Ms. Kennedy wished to send a message of hope, international cooperation, support and solidarity, and to actively support the “We Care”program.

On this occasion, Ms. Kennedy and Mrs. Vardinoyannis distributed clothing to 500 children.