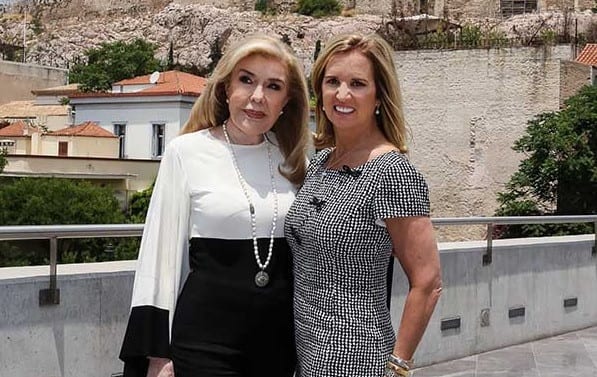 Athens, Greece 10 June 2015: A call to build a more peaceful and more fair world, where human dignity and human rights will be respected and protected, as well as a message of optimism, that each one of us can make a difference, was sent on the 10th of June 2015 from the Acropolis Museum, by international activist and President of “Robert F. Kennedy Human Rights”, Ms. Kerry Kennedy, daughter of the late Robert F. Kennedy and Ethel Kennedy.

During her lecture titled “Speak Truth to Power safeguarding human rights”, organised by the “Marianna V. Vardinoyannis Foundation” in the presence of Mrs. Ethel Kennedy, Ms. Kerry Kennedy made many references to ancient Greek philosophers, poets and heroes, who inspired her father and determined his and her own course, as well as references to modern heroes from across the world, who stood up against violence, cruelty, corruption and injustice, inspiring the admiration and the warm applause of the people attended the event at the amphitheatre of the Acropolis Museum.

“Our own founding fathers were based on Pericles, Kerry Kennedy noted as she started her speech, when we said that we do not wish to copy other nations, but we want other nations to copy us. This is why we feel close ties with Greece up to this day… I believe that this idea of “a unified world” is especially important, because it is outrageous that in a country like Greece, a mother today has to decide whether to buy medicine for her aged parents or food for her children! There is no reason why this should be happening in a country that is a member of the richest and most powerful group of countries in the history of the world, and that these decisions are being made today… We, and every country, must support Greece, because if we don’t, everyone will be in a big trouble all around the world!”

Kerry Kennedy continued: “What can we as individuals do against so many setbacks caused by violence and corruption in the world? About twenty years ago, I asked that question to 50 of the world’s bravest human rights defenders for my book “Speak Truth To Power: Human Rights Defenders Who are Changing our World”. None of them claimed to have an answer to the world’s ills, of course, but they all said that they couldn’t stand by and watch while people suffered. Each of these incredible defenders understood their duty—not as heroes, but as human beings… And later, hearing so many stories of ordinary people finding themselves unable to ignore their conscience, an idea occurred to me: What if we could teach young people to be human rights defenders? And what better way to do so than through presenting the interviews of these brave people, that show us that CHANGE is made by people just like you and me, with fears and hopes and dreams just like ours. If we could bring that lesson to young people, we could transform our communities. And so the “Speak Truth To Power” curriculum was born… For example when we want to speak to children about the problem of child labour which we must solve, they are challenged to start asking where their clothes and shoes are made, and by whom. Perhaps by companies that use child labour? The goal of “Speak Truth To Power” is not to give our young people facts that they will soon forget, but to ignite in them a lifelong commitment to human rights. Giving our children the tools to be human rights defenders is the surest path to a better future…”

Kerry Kennedy thanked Mrs. Marianna V. Vardinoyannis, UNESCO Goodwill Ambassador and President of the “Marianna V. Vardinoyannis Foundation” , by saying: “It is a great honour to be honoured with this event by Marianna Vardinoyannis and her Foundation. Marianna is one of my most favourite people in the world. She is a source of inspiration, a valued friend and associate. And I know that across the world, where her name and work are known, she is a role model for her generosity and considered a heroine for offering what she can to everyone: She protects sick children, advocates for the rights of women, contributes with her activities in important sectors, such as education and culture…”

During her opening speech, Mrs. Marianna V. Vardinoyannis praised Ms. Kerry Kennedy and her mother Ethel Kennedy, saying : “We are happy to welcome today our distinguished guest, a great philhellene, a humanist, dynamic defender of human rights, justice and freedom, the President of the “Robert Francis Kennedy Human Rights” Center, Ms. Kerry Kennedy. Kerry Kennedy is a tireless activist for peace, a multi-awarded author and at the same time an affectionate mother of 3 wonderful girls. Kerry Kennedy follows in the footsteps of her dear father, the late Senator Robert Francis Kennedy and her beloved mother Ethel Kennedy, Founder of “Robert F. Kennedy Center for Justice and Human Rights”, who received on 24 November 2014 the highest distinction in the USA, the “Presidential Medal of Freedom” by the President of the United States of America, Barack Obama. Ethel Kennedy inspired in her children the dynamism, vision and ideals of Robert Kennedy, stood by them with undying faith and never stopped encouraging the members of her family to disseminate and fulfil his vision, to honour his memory and his work through their own efforts and initiatives. The Great Lady in the hearts of all Americans, my dear friend Ethel Kennedy, is amongst us today, honouring us with her presence. She honours our effort and gives even more power to the message we will send today from here. I thank her from my heart for her valuable support all these years, but mainly I thank her as mother to mother, for the hope and the determination which she transmits through her activities and significant contributions throughout the past decades! Our Foundation honours today Ms. Ethel Kennedy for her constant vigilance for human rights and her long-term work for democracy and justice… It is a great honour for our Foundation to collaborate with the “Robert F. Kennedy Human Rights” Center. This is a collaboration that has been going on for years, whereas in 2013 we signed an agreement to promote this program to Greek students. We have collaborated through time in our efforts with the Ministry of Education, which is helping us with all the stages of the program, and as a result we will be able to distribute the copies of the Greek edition to Greek schools soon, in each corner of Greece, and Greek children will be able to participate in this important program. Be a defender! the book encourages students. “Each one of us can become a defender of human rights, either during a single day or throughout the academic year”, it states, and historic figures pass through its pages, like Archbishop Desmond Tutu, Nelson Mandela, Rigoberta Menchu Tum and many others! At the same time, in this “pantheon” of international personalities we added, with the cooperation of the Institute of Educational Policy, a Greek chapter dedicated to one of our own great symbols, Giorgos Seferis. The chapter speaks about his life and work and includes his inspiring speech during the ceremony for the award of the Nobel Prize in Literature which he received in Stockholm in 1963. Our goal through this program is to prepare a new generation of responsible, sensitive, just citizens, who respect the value of life, diversity and the right of every man, woman and child to have a life of dignity, growth and well-being…”

The event was addressed by Professor Dimitris Pantermalis, President of the Acropolis Museum, and Dr. Frank La Rue, Director of “Robert F. Kennedy Human Rights” in Europe and former Special Rapporteur of the United Nations on the Promotion and Protection of the Right to Freedom of Opinion and Expression.

After the end of the speech, Mrs. Vardinoyannis awarded Ms. Kerry Kennedy and Mrs. Ethel Kennedy with the “Marianna V. Vardinoyannis Foundation Prize 2015”.

The event of Kerry Kennedy’s lecture was attended, among others, by Deputy State Minister Mr. Terence Quick, Princess Irene of Greece, Princess Tatiana of Greece, the Ambassadors of the UK, Australia, Bulgaria, Ireland, Israel, Croatia, Mexico, Nigeria, Ukraine, Qatar and Finland, as well as representatives of the Embassies of the USA, Germany, Iraq and Romania, Mr. Giorgos J. Vardinoyannis, Mrs. Alexia Vardinoyannis, and many other.