International Conference Climate Change and Challenges for the Future Generations 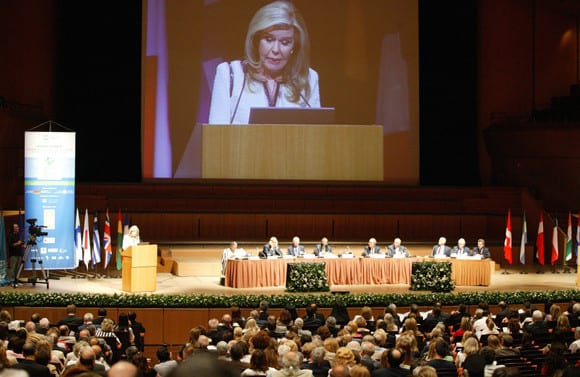 The impacts of climate change as a challenge for the future generations with particular emphasis on the most sensitive and vulnerable population groups of the Mediterranean countries, especially sick children, is the topic of the two-day International Conference that will take place in Athens, at Megaron, the Athens Concert Hall, on June 2nd and 3rd 2009.

The Conference was organised with the initiative of the UNESCO Goodwill Ambassador and President of the “Foundation for the Child and Family”, Mrs Marianna V. Vardinoyannis, and the Chairman of the “Intergovernmental Panel on Climate Change” (Nobel Peace Prize 2007) and the Director-General of “The Energy and Resources Institute” (TERI), Dr Rajendra K. Pachauri. The conference was held under the auspices of UNESCO and in collaboration with the World Sustainable Development Forum.

The Conference aimed at exchanging opinions concerning the great issue of the impacts of climate change on the Mediterranean countries along with an effort to minimise the consequences of the change of climate, paying particular attention to the impacts on the next generations, particularly to the health of the most sensitive groups, such as the children who suffer from serious or chronic diseases as well as children who live in conditions of poverty.

Piraeus Bank was the major sponsor of the Conference.

The Leader of the Opposition of Greece, Mr. George Papandreou.

The IPCC (Intergovernmental Panel on Climate Change) has stated that the warming of the climate system is unequivocal. The changes are evident with the increase in the global average air and ocean temperature, ice melting and rising sea level. It further states the vulnerability of the Mediterranean region to some of these changes. Mediterranean ecosystems may be among the most impacted. A temperature increase greater than 2°C could result in desert and grassland expansion at the expense of biota land. The resulting sea-level rise is expected to exacerbate inundation, storm surge, erosion and other coastal hazards, thus threatening vital infrastructure, settlements and facilities that support the livelihood of island communities. (IPCC WG2 FAR)

In the future, climate change could critically undermine efforts for sustainable development. Climate change may add to existing problems of desertification, water scarcity and food production, and may also result in introducing new threats to human health and ecosystems. Thus, there is a need to lay emphasis on adapting to these impacts of climate change by controlling the intensity of desertification, safeguarding integrity of the water cycle and stopping the further loss of wetlands and biodiversity.

In the Mediterranean region, along with adaptation, there is also an urgent need to reduce greenhouse gases emissions. It can be achieved by strengthening the use of renewable energy resources and promoting energy efficient and eco technologies in important sectors of the economy.

This would require identification of measures to both mitigate as well as adapt to the consequences of climate change. In addition, the world urgently requires a global vision based on the principles of equity for long term cooperative action. There is a need for a universal agreement to solve this problem and COP 14 (Fourteen session of Conference of Parties) at Poznan, Poland last year could serve to address some of the concerns including long term cooperative action and the need for further commitments by Annex 1 Parties. Further deliberations on these issues in this year will be needed for achieving a desirable result at COP 15 in Copenhagen, in December 2009.

To be able in line with the international developments, it is essential that actions at regional/national scales are uniformly aligned with the activities to address climate change.

In this context international cooperation holds value and the conference aims to address climate change mitigation and adaptation while discussing the associated opportunities and constraints, as well as the challenges for the future generations. Special attention will be also given to the consequences of climate change on health, in particular on the most vulnerable groups such as children suffering from serious and chronic diseases, in addition to poverty.

The Social Dimension of Climate Change

Educating children to respond to the Climate Change challenge.

Preparing children from the early years for a Climate Constrained world.

Role and impact of youth in addressing the challenge of Climate Change.

Identification of key impacts and areas of intervention.

Use of renewable energy and energy efficiency techniques.

Technology for adaptation and mitigation.

According to the findings of the UN Intergovernmental Panel on Climate Change the scientific evidence on human related impact on climate change is beyond any doubt.

The forecasts for future climate change include an increase in the rate of change of frequency, intensity and duration of floods, droughts, heat waves, fires and the extreme weather phenomena in general.

Greece and the Mediterranean Basin in general are very sensitive to climate change impacts and this will in turn have a negative impact on vulnerable groups of people and the health of children and the elderly.

The international community should make every possible effort in order to urgently decrease the carbon dioxide and greenhouse gases emission. After all, the cost of this reduction is low, and in some cases even negative. The European Union should continue leading the world efforts for the reduction of the emission of gases.

We all ought to take action not just the governments, experts and the relevant institutions. Will, determination, information and education are needed in order to we overcome inactivity and change the way of living, giving up the habits which contribute to the greenhouse effect, in order to face the impacts of climate change with the less possible loss.

Prevention is better than the cure of destruction. The objective of all efforts and actions regarding the critical issues related to climate change should therefore focus on preventing rather than curing.